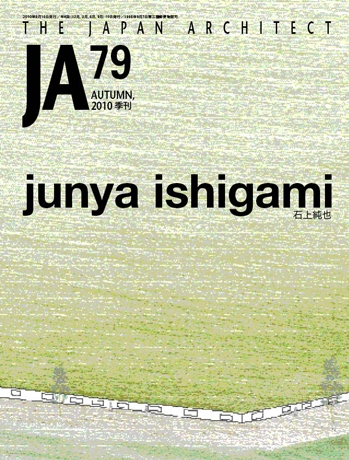 JA79 is a special issue devoted to the works of Junya Ishigami. Still in his thirties, architect Ishigami has already begun to attract attention from all over the world.

With their astounding design, his works always exhibit the new possibilities of architecture; a thin, large, and bouncing table, a workshop consists of 305 slender columns, a massive balloon floating in the space, greenhouses made up with columns as slender as plants, and so on.

Including his latest projects such as Architecture as air which won the Golden Lion of the best project at the 12th International Architecture Exhibition at Venice Biennale, JA79 fully expresses Ishigami’s architectural philosophy.

The Potentiality of Towers

The Proportions of the landscape

lake project / Observatory of the mountain

A municipal hall of mountains / A museum on a cape

A Villa in the City

A new scale of architecture