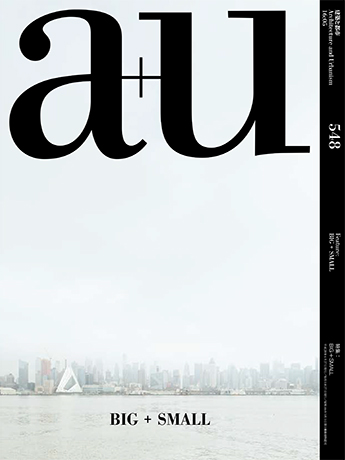 This is a special issue devoted to the architectural office BIG – Bjarke Ingels Group, based in Copenhagen and New York and led by Bjarke Ingels. BIG is engaged with projects both large and small in locations all over the world. This issue reflects that diversity, with the first half devoted to the large, urban-scale projects for which the practice is best known, and the second half devoted to smaller projects, including residences and a pavilion.

Including those nearing completion, 20 of the 22 projects introduced here are currently underway. Over the next few years, we will see many more of their works finished.
Leading off the issue is an interview of Bjarke Ingels by Jeffrey Inaba. The office’s projects are characterized by conceptual clarity and surprisingly playful forms. From the interview, we see how these characteristics are the answer to the basic architectural themes of form, function, site, circulation, direction, light, air, and materials. At various scales, from small to large, their work is based on a detailed engagement with spatial experience and structure, architectural materials and the surrounding context, and broader issues in society – an ongoing challenge unfettered by conventional ideas.

What is behind the office’s remarkable development since its foundation in 2005, and what is the source of their ideas, announced one after the other? They may be one of the architectural offices most sensitive to current trends in the world, and an embodiment of what the world needs from architecture.

Essay
Everything is Possible
Antón García-Abril

VIA at West 57th Street