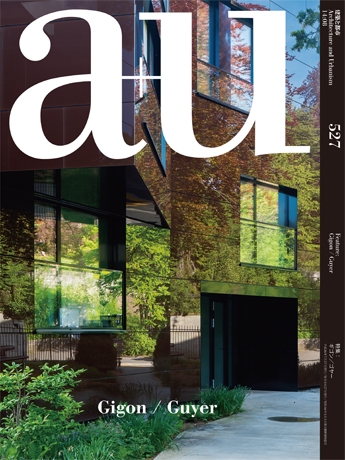 This edition of a+u is dedicated to the recent works by Gigon / Guyer, an architectural practice by Annette Gigon and Mike Guyer based in Zurich, Switzerland, with whom we made an earlier monograph in November 2006. This new edition introduces twelve works in Switzerland, including detached houses, multi-unit apartments, office buildings, and areal developments, as well as two exhibitions which reveal an essence of their approach toward the sites in their everyday practice.

In the past several years, their sphere of work has expanded in terms of type and size. Designing urban-scale projects such as Prime Tower and Löwenbräu-Areal, located at the former industrial sites in central Zurich, is a particularly significant change. This issue features two essays on these projects written from the urban-structural point of view by Mr. Caspar Schärer and from the urban-spatial point of view by Mr. Erwin J. S. Viray. When I visited Zurich in early spring, 2014, on my way from the airport to the city, the first thing my eyes caught was the Prime Tower. Reflecting the changing sky and surrounding landscapes, the building presented itself with numerous appearances even during my short stay. This symbolic building, the tallest in Zurich, is an experiential being, delicately standing with the passing time. What one could witness here is the architects’ attitude toward architecture that also governs their other works of museums or houses: reading of the place, translating the reading into materials and volumes, and creating a space with opportunities for people to discover something new.

The diversity of appearances their buildings offer certainly contributes myriads of possibilities for such discoveries. Architecture to them is, borrowing their words from the interview, “material that was intelligently put together, constructed in order to create durable, beautiful hollows.” We would like to introduce such experiences to our readers with the newly-taken photographs in this edition.

Essays
Zurich is Where the Prime Tower is
Caspar Schärer