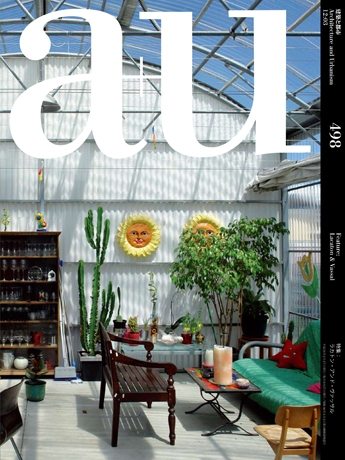 This issue is devoted to the work of French architects Lacaton &Vassal (Anne Lacaton and Jean-Philippe Vassal). In order to fully capture their architectural and urban concerns in one volume, the issue documents their work from 1992-2011 in approximate order.The unifying theme of their work is in ‘maximizing effect through minimal costs.’ Special emphasis is placed on the existing environment and available structures, and strategiesthat supplement and compliment what is already present arepreferred over those that start from scratch. Additive elements, like greenhouse modules and precast concrete frames, are directly incorporated into design. The motivation is economic as well as ecological – always conceiving space through the poetic integration of nature, people, buildings, and landscapes.I paid a visit to the office of Lacaton & Vassal in the autumn of 2011. While looking through their photographs, I notice that there were hardly any that showed their work immediately after completion. Instead, I find photographs of two distinct phases; of those being built and of those being lived in. The latter is full of life, filled with furniture and personal objects, openly revealing the daily lives of the inhabitants.I was struck by their response when I asked about this: “Architecture is not defined by specific moments because itis not simply an object to be looked at. Rather, its existencedepends on its occupation.”Within an economic context where budgetary constraints aremaking it more difficult for architects to realize public projectsto their standards, Lacaton & Vassal continues to build for theenrichment our society and daily lives. No matter how difficult,their work is proof that it is possible to improve people’s livesthrough the practice of architecture. (a+u)Translated from Japanese by Michael Sypkens.Essay: Architecture must be direct, useful, precise, economical,free, joyful, poetic and cosmopolitan.Lacaton & VassalLatapie HouseLow Cost Dwelling, PrototypeD House, Cap FerretR House, KeremmaS House, CoutrasSocial Housing, Mulhouse23 Housing Units, TrignacEcological Neighborhood, La VecquerieApartment Building, PoitiersHousing, Petit MarocHousing Transformation, La ChesnaieTransformation of Housing Block, Tour Bois le PrêtreEssay: Fragility, a moment in an open worldKarine DanaArchitecture School, NantesUniversity Center of Management Sciences, BordeauxExhibition Hall No. 7, Paris Nord VillepinteWine Cellar, Embres et CastelmaurePalais de Tokyo, Contemporary Creation Site (Phase 1)Palais de Tokyo, Contemporary Creation Site (Phase 2)Projects ListOriginal French Essays