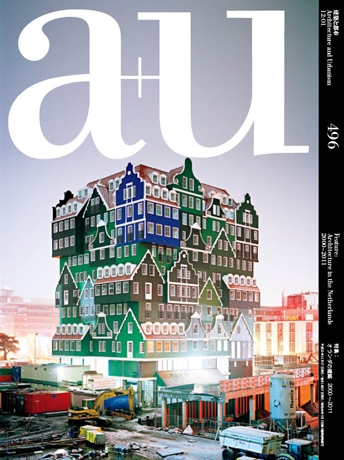 This issue features architecture mainly completed in the Netherlands from 2000 to 2011 and trends in the architecture of the Netherlands over the past 10 years. The works in this issue were selected by guest editor Ole Bouman, Director of the Netherlands Architecture Institute (NAi), and the NAi editorial team (Bouman, Chris Luth and Marten Kuijpers). In addition to the 30 featured works, 100 works are listed and indicated on the maps at the front of the issue.Architecture designed by Dutch firms such as OMA and MVRDV has appeared frequently in the architectural media since the 1980s. Phrases like ‘programmatic’ and ‘SuperDutch’ have dominated the discussion and served as watchwords for new design methods. At that time, there was probably no other movement that exerted such a strong influence on architectural students and young architects.So what is the state of Dutch architecture recently? We visited NAi in Rotterdam in the summer of 2011. From the meeting space in the NAi building, located in the museum park, a few high-rise buildings under construction and a couple of cranes could be seen. Ole Bouman said, ‘Once these buildings have been completed, we will probably not be seeing new cranes for a while,’ explaining the effect of the global financial crisis on architecture in the Netherlands. But, he continued, ‘That is why something interesting has happened.’The works in this issue were classified into three categories: architecture aiming at an emotional or intellectual response; architecture focusing on craftsmanship and precision; and performative architecture. The editorial team calls the third ‘architecture of consequence’ and portrays its practitioners as urban activists. Henk WJ Ovink explains in his essay that alliances with politics, development, investment, and education are essential. It seems that architects in the Netherlands have started something new again, expanding the role of architects and opening up new possibilities.We would like to express our special thanks to the NAi editorial team, the authors of the articles, and all of the architects who contributed to this issue.(a+u)