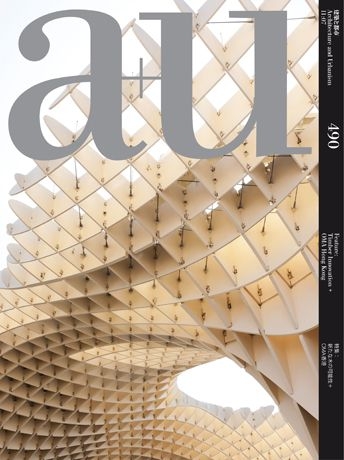 Although timber is one of the most exciting materials, the opportunities to use it in large-scale architecture have been a few compared to other materials such as concrete and steel. But the situation is now changing.Recent technology advances and expands a possibility of timber, which is sustainable material, to be used in large-scale architecture. There have been precise and dynamic proposals with the advanced fabrication and simulation technique; and related intimately to technologies such as prefabrication, CNC, structural modeling, and industrial robots. Also, many new timber materials have appeared.This issue introduces these recent innovations and achievements, providing a glimpse of possibilities that may lie ahead for timber. (

Based in Rotterdam, OMA operates around the world, with offices in New York, Beijing, and Hong Kong. In particular, growth in China and the Asian economic sphere has led to growth at OMA’s Hong Kong office. Founded in 2009, it currently has a staff of almost 50 and is involved in a variety of projects large and small. This issue introduces works in progress such as the Shenzhen Stock Exchange, due for completion in 2012, the Taipei Performing Arts Centre, and the New Campus for Chu Hai College of Higher Education. It also looks at West Kowloon Cultural District, the project that provided the original impetus for opening the office, and delivers an interview with OMA Hong Kong partner David Gianotten, who talks about the momentum of the office, the speed of development in Asia, and the office’s cooperation with Rem Koolhaas. (