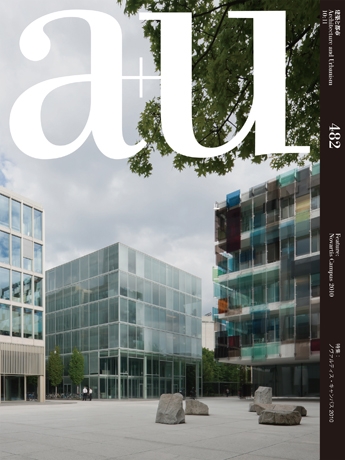 In Basel, Switzerland, there is an architectural wonderland called the Novartis Campus. It is the base of Novartis International AG, a multinational pharmaceutical company. The campus has been featured in several architectural magazines, including a+u, which have introduced buildings by Diener & Diener, Peter Mrkli and SANAA. There are also buildings by Rafael Moneo and Fumihiko Maki, completed last year, and buildings by Yoshio Taniguchi, David Chipperfield, Tadao Ando and Frank O. Gehry, completed this year. Buildings by Alvaro Siza and Eduardo Souto de Moura are scheduled for completion next year. Unsurprisingly, in view of the international prominence of the architects who were invited to participate, the quality of the architecture is superb. The campus itself has been designed from corner to corner, including the squares, streets and gardens. However, the campus is not a place for the exhibition of architecture, like an exposition or a theme park like Disneyland. It consists of offices and laboratories for the people who work there.

The site of the Novartis Campus was originally an industrial complex, and it has seen continuous development since the late nineteenth century. The restructuring plan, launched about ten years ago, is based on a grand vision of the transformation of this production site into a Campus of Knowledge. In this issue, we provide an overview of the Novartis Campus of 2010, together with in-depth introductions to the individual works of architecture. The photographs were taken this July. Vittorio Magnago Lampugnani, one of the building architects and the master planner of the Novartis Campus, contributed an essay about the overall urban planning. This issue also illustrates the history of the site and the landscaping, artistic, and ecological aspects of the campus.

The Novartis Campus has not been completed. As a part of a multi-dimensional company strategy including architecture, landscaping and sustainability, it will develop further. What does it have to tell us about the possibilities of a new workplace?(a+u)