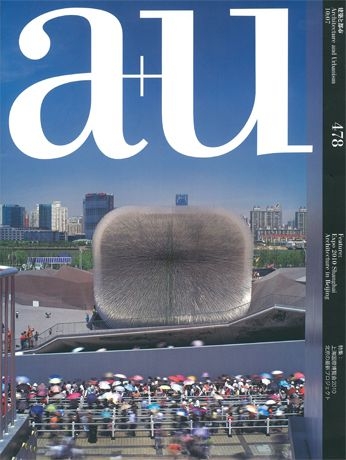 The first World Exposition was held in London in 1851, in the wake of the Industrial Revolution. Ever since this origin in the age of industrialization, World Expos have presented the scientific and technological achievements of their times representative examples being Joseph Paxtons Crystal Palace and the Eiffel Tower in Paris. The Worlds Fair is also said to be a response to the development of commerce and manufacturing that resulted from a population explosion and its concentration in cities and to the growth in international trade that accompanied advances in transportation systems. The host cities of past Expos parlayed economic success into successful invitations, and developed further as a result of the Expos.
Notable examples include London, Paris, Chicago and Osaka.And in 2010, Shanghai.

This issue features the World Expo currently underway in Shanghai. It introduces 34 pavilions newly photographed after the opening on May 1, with detailed information from the participating architects.

It also introduces some projects recently completed in Beijing, with an essay discussing developer-architect dynamics in the socio-political context. In addition to the large-scale projects that fascinated the world during the 2008 Olympic Games, mediumand small-scale buildings are going up rapidly. Together with the mega-event Expo 2010 Shanghai, we introduce the practice of Chinese architects who are grappling honestly with conditions in their city. (a+u)