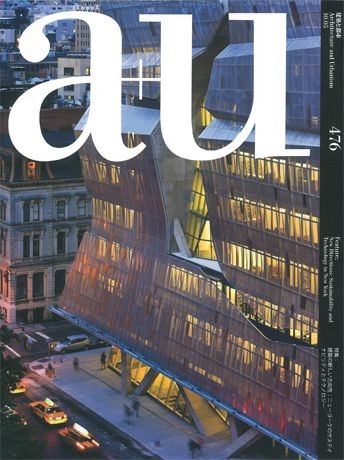 The High Line, a former elevated freight rail line which was once abandoned as a negative legacy, was revived into a new public park in 2009. The contrast between this infrastructure and native plants seems to present a completely new relationship between the city and “green”, while it reminds us of the history of New York City. A hotel, a fashion brand office and a corporate headquarters building have been constructed in the surrounding area, and several luxurious condominiums designed by star architects will be completed soon. The second phase of The High Line is under construction and is scheduled to open in 2011, and the city is looking forward to the third phase.

This issue focuses on new directions in architecture: sustainability and technology in New York, illustrated by The High Line and its neighboring buildings as well as by new academic buildings for The Cooper Union and Barnard College, an extension project for the Museum of Modern Art, and Beekman Tower, which will be the highest housing tower in Manhattan.From this issue

s starting a ‘Sustainability Survey’ series, which will report currents of the environmental challenges facing architecture and urbanism. In this issue, Adam Yarinsky reports on the present and future situation in New York City while introducing numerous recent projects. This issue also introduces the design methods using new digital tools by young architectural groups who practice mainly based in New York and on the East Coast of the USA. Daisuke Hirose predicts in his essay that architecture will come to support an ecological society by shifting away from experimental usage to practical usage of digital tools, some 20 years after they were adopted in architectural education.

New technologies are being developed to decrease negative environmental impacts. The environment and technology are like two sides of the same coin, and it is impossible to imagine solutions to environmental problems without technological support. That is perhaps most evident in the field of architectural design. (