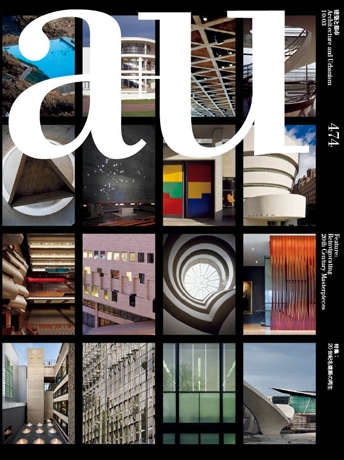 Certain buildings constructed in the 20th century are presently faced with the crisis of demolition. There can be no doubt that even the 20th century masterpieces, praised as symbols of architecture, are not to be demolished. It seems that the development of new materials and new technology have made it possible to construct buildings to a scale that was unimaginable 50 or 100 years ago, and that these buildings today have a larger degree of freedom in their form. There might be various ideas about life expectancy of the building in the built environment while considering factors such as the economy, convenience, and safety, among others.
This issue focuses on 20th century masterpieces that have recently experienced restoration, conservation, renovation or extension. While Eero Saarinens TWA Terminal (1962) was restored and revived through its linkage to the new extension, Paul Rudolphs Art and Architecture Building in Yale University was also restored, but carefully unified with its extension. After repeated repairs and additions, Louis I. Kahns Yale University Art Gallery (1953) and Ludwig Mies van der Rohes IIT Crown Hall (1956) are now both restored to its original design. With the application of modern technologies, Walter Gropiuss Bauhaus Building in Dessau (1926) and Frank Lloyd Wrights Solomon R. Guggenheim Museum (1959) have been restored to a state similar to that of their completion day, and will continue to be conserved for the future. Jorn Utzons Sydney Opera House (1973) has incorporated Building Information Modeling into its restoration process, and is currently researching its possibilities for use in future restorations.

The methods of conservation and renovation of buildings are unique as each building has an individual solution, from strict adherence to the original design to a flexible expansion and rebuilding. While the methods of reinvigoration are different, we will be able to see the original architects vision inherent within the buildings when we stand in front of them. (a+u)