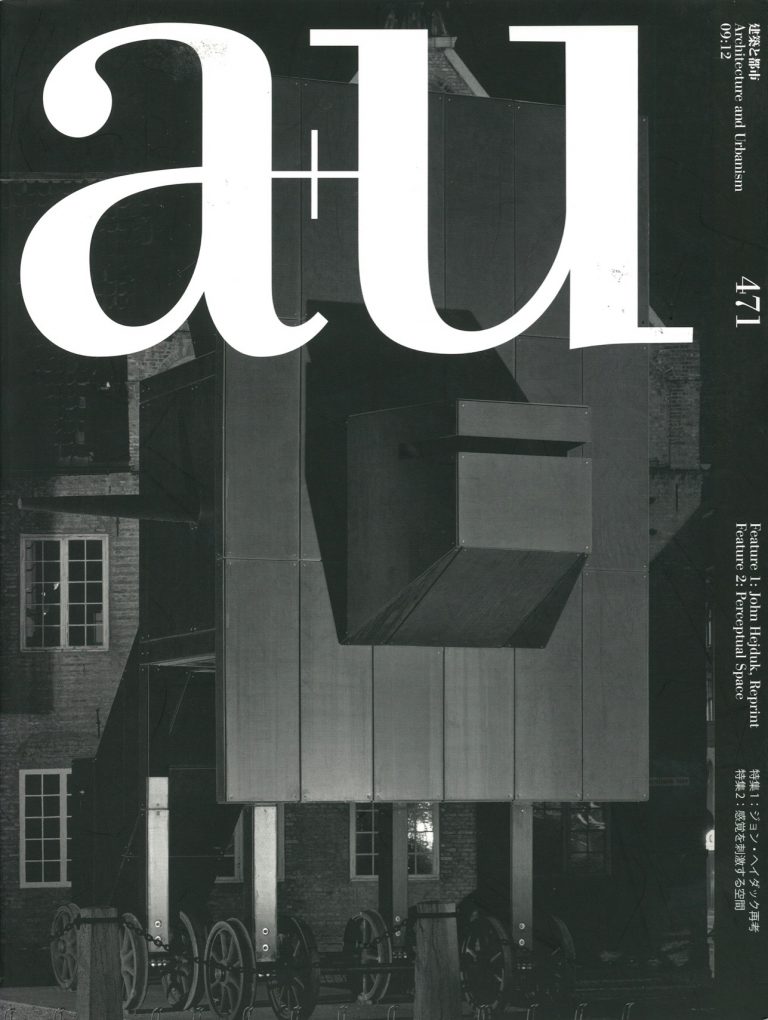 Feature 1: John Hejduk, Reprint “Who is John Hejduk?”, a first year architecture student asked. We were in studio, year 2009, browsing through the Mask of Medusa: Works, 1947–1983, admiring the drawings, sketches, texts; appreciative of the line weights, the layout of the drawings, the narrative, and the exploration of the language of architecture.I replied that he is an inspiration, someone who opened a world of imagination, extended the boundaries of architecture beyond built architecture to the realm of dream, poetry and creation. He is a role model in the pursuit of finding expressions of the language of architecture; an influential educator, Dean of the Irwin S. Chanin School of Architecture at the Cooper Union from 1972 to 2000, where he opened the path for conversation of various people and disciplines. Peter Eisenman in the catalogue for IAUS, John Hejduk: 7 Houses in 1980, wrote, “… Hejduk is first and foremost a teacher, … it was an accident of both time and place that Hejduk became a teacher, he thought and still thinks of himself as a builder”. He explains the 7 houses featured in the catalogue and the particular drawing technique where Hejduk used fine pencil, the brittle 8H and 9H, where drawings “inherently began to suggest architectural content… where to see the houses casually as Palladian or Miesian is to miss the energy impacted in each small gesture, gestures so filled with architectural content. That one must look hard to find their delicate, almost imperceptible energy… this tradition suggests a “work on the language of architecture”.Daniel Libeskind in the introduction to the Mask of Medusa in 1984 wrote, “What is decisive about his work is that it leads to a different place, on which is both alien and inalienable: a place which consecrates Architecture with mysteries that are no longer decipherable within the ordinary code of mimesis… Hejduk’s work unconceals what cannot be seen when one only looks at cities, bridges, towers, swing-sets, prisons, ferris-wheels, even farmland. His architecture apprehends the Invisible in them”.Perceptively, a second year student observed: “Hejduk’s drawings evoke forgotten memories, images of the modern project in the 1920s and 1930s: expressionism, futurism, constructivism, suprematism, purism, de Stijl, cubism, etc, though expressed in a different language”. I add, that it seems that the seeds of the modern project manifested in those times and seemingly halted by historical accidents, are projected into the changing need of the 1970s, 1980s and 1990s. Timely, indeed NOW, that this opens a dialogue with the works of Hejduk on the possibilities of the language of architecture.The a+u special feature on John Hejduk in January 1991, opened a decisive encounter. The reprint of the issue, continues the pursuit of the language of architecture, making it possible to remember forgotten dreams and projects, and encourage the courage to create alternative forms of making and expressing architecture. This reprint is a vital reminder for an old man like me, as it is a decisive encounter too for the first year student of architecture asking, “Who is John Hejduk?”Erwin J.S.Viray / Assistant professor at the National University of SingaporeNEW CONTENTSEssay: The Wall as EventMichael Hays

Shigeru BanWhat I Learned From John HejdukThe Wall House #2REPRINTEditor’s IntroductionEssay by David ShapiroAn Introduction to John Hejduk’s Works: Surgical ArchitectureA Poem for John Hejduk by David ShapiroAfter a Lost Original / The Snow Is Alive / Walter Benjamin: A Lost Poem / In Germany / After Asturiana / You Are Tall and Thin / Prayer For My Son / To My Son / House of The Secret / For VictimsHousingsBERLIN TEGEL

The Sleep of AdamFeature 2 : Perceptual Space One of the defining characteristics of architecture, one that makes it what it is, is that people can touch it and go inside it. It is fair to say that architecture is what it is because it has interior spaces, and that interior spaces exist because of architecture. Also, compared to architecture itself, interior spaces are closer to human bodily perceptions.Recently we are seeing more interior designs that represent crystallizations of interactive relations between people and space. These designs reveal the poverty of the view that regards interiors as nothing more than decoration. Looking outside architecture, we also see a transition away from the previous emphasis on materials and visuals and toward designs that stimulate all five of our senses. Instead of closure as the goal, we see designs that leave something open to explore in the future – an approach that resonates with the recent trend toward sustainability and lessening the burden on the environment.This issue introduces some of the most prominent representatives of this moment in interior design, and examines from a variety of perspectives the fertile relationships between space and human perceptions.We can feel a new wind blowing, one that is bringing not more show but more reality.Naomi ShibataPROJECTSOMA/AMO Spring/Summer 2010 PRADA Men&Women Fashion ShowBackground of Design: Collaboration between OMA/AMO and PRADAJean Nouvel  Les Bains des DocksBackground of Design: Formcoating Technology used in Play Area for ChildrenKarim Rashid  Chelsea LoftBackground of Design: Karim Rashid UniverseLOT-EK  PUMA CITYBackground of Design: Making Mobile BuildingJohn Pawson  Monastery of Our Lady of Novy DvurBackground of Design: Detail Drawings of Monastery of Our Lady of Novy DvurFrédéric Flamand