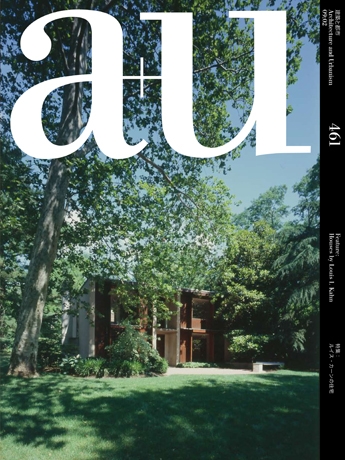 Designing houses was a constant in the career of Louis I. Kahn, even now his houses are still loved and lived in. Over four weeks in 2008, we had the opportunity to photograph 12 houses by Kahn. This issue illustrates the current state of these historic houses — from his first house, designed before World War II, to the house completed as the last work during his lifetime – with a new selection of images and many original drawings.

In the course of research for this issue, a series of drawings documenting the design process of the Fisher House and a 40-minute conversation tape between Kahn and Mrs. Fisher were found in the basement of the Fisher House. They are included in this issue. We would like to express our special thanks to all of the present owners who kindly allowed their homes to be photographed. We are also indebted to William Whitaker, curator of the University of Pennsylvania’s Architectural Archives, which houses Kahn’s Archives, for his guidance in shaping the content of this issue and coordinating all on-site photography.

Essays
Louis Kahn, From the Inside Out
George H. Marcus

Louis Kahn and the Art of Drawing a Room
Peter Kohane

Conversation
A House within a House
Louis I. Kahn and Doris Fisher