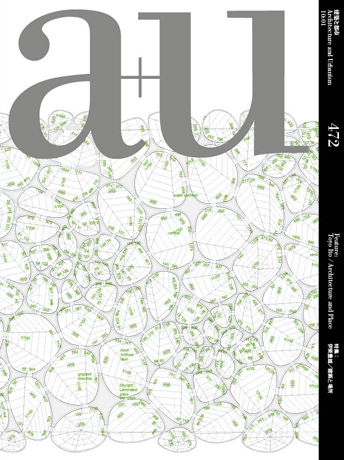 a+u has previously published two feature issues on the architecture of Toyo Ito Under Construction (May 2004) and Beyond the Image (June 2005). This issue extends the series with a feature on projects by Toyo Ito & Associates, Architects that are currently under construction or about to break ground. Entitled Architecture and Place, it describes projects in six regions around the world: Taiwan (Taipei and Taichung), Spain (Barcelona and Madrid), the West Coast of the United States (Berkeley), Chile (Marbella), Singapore, and the Inland Sea of Japan (Imabari). In addition to details of the projects, we have included reports from the sites and photos of the buildings under construction. We have also included contributions from project architects in the office who have been active in these regions. Their candid descriptions of the rewards and challenges of working overseas offer a glimpse into the processes through which innovative architecture is realized.
The feature ends with a conversation moderated by Hironori Matsubara. It offers insights into the lithe but determined approach of an architectural office working in market economies where architecture is consumed as a good like any other. (a+u)

Essay: Building on the West Coast of USA
Ryu Mitarai

Essay: Building on an Island in the Seto Inland Sea
Michiko Okano